Decentralized systems can be divided up into two categories:

Decentralized server systems typically only decentralize the server part of the total system. The overall architecture is still a client-server architecture - with some nodes in the system being clients, and other nodes being servers. 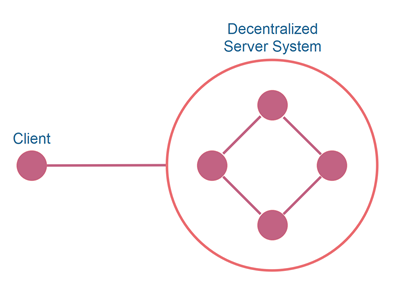 Examples of decentralized server systems are:

Peer-to-peer systems (P2P), also sometimes referred to as peer-to-peer networks, are systems where all nodes in the network are both clients and servers. Each node (peer) both provides a service to other nodes (peers) as a server, as well as consume that service from other nodes as a client. Thus, all the nodes in a peer-to-peer system are each others peers - meaning equal in functionality and roles. The diagram below shows a fully decentralized system where all nodes have the same level of functionality and authority. That is why they are often referred to as peers - each other's equals. 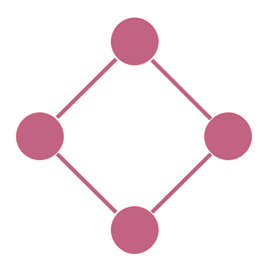 Examples of P2P networks and P2P network algorithms and topologies are:

Note: Some blockchain systems have nodes that do not all perform the exact same job / role. For instance, some nodes are "validator nodes" and other nodes are "wallet nodes" etc. Such blockchain systems might be classified as decentralized server systems instead of pure P2P systems. However, what matters is not what classification you give a given blockchain system. What matter is that you understand how it works.

I will explain these benefits in a bit more detail in the following sections.

A well-designed decentralized system can often scale reasonably well horizontally - meaning scaling by adding more nodes (computers) to the network, rather than having each node use more powerful hardware (vertical scaling).

P2P networks can sometimes run directly and exclusively on the end users devices (computers, phones, consoles etc.). In these situations the end users are contributing the hardware needed to run the system. Thus, the creator of the software creating the P2P network can save a lot of costs on hardware. They will most likely not be able to have zero hardware costs - but probably significantly less than if they had to pay for all the hardware used to run the system.

One of the biggest challenges in decentralized systems is to reach consensus about a shared state - if changes to that state can be initiated by more than one node in the system. By "state" is typically meant some data stored in what corresponds to a database - a decentralized database, that is.

If two or more nodes in a decentralized system both try to change the state of the same logical object, somehow the system needs to be able to determine in what order the state changes should be applied. 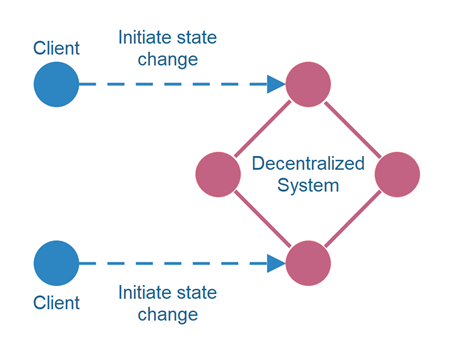 Decentralized consensus, also sometimes referred to as distributed consensus, is an extensive topic, and there are several different approaches to how to achieve it - so I will not go into more detail about it here. I will probably write more about it in a separate tutorial trail in the future.

Depending on the topology of the decentralized system it can be challenging to broadcast or multicast messages effectively and efficiently to all, or a subset of the nodes in the network. By effectively I mean making sure that all the intended nodes actually receive the messages. By efficiently I mean without the nodes receiving the messages more than one time. Some models of decentralized broadcast may be able to guarantee one but not the other.

The topology used by a decentralized system has a lot of impact on these issues. You might have to design the topology of your system to fit your specific needs, rather than using the same, generic topology for all use cases.

The issues of broadcast, multicast, routing and lookup is what I designed the P2P topology of the Polymorph polyring topology to address.