In order to get maximum performance out of your Java application you need to understand the hardware it is running on. When you write code that conforms with how the hardware works, you get higher performance. Martin Thompson calls this "Mechanical Sympathy".

Of course you don't need to understand every little detail of your hardware. Therefore this tutorial focuses on the parts you should know.

Modern computers tend to have the following components:

The above mentioned hardware components are illustrated here: 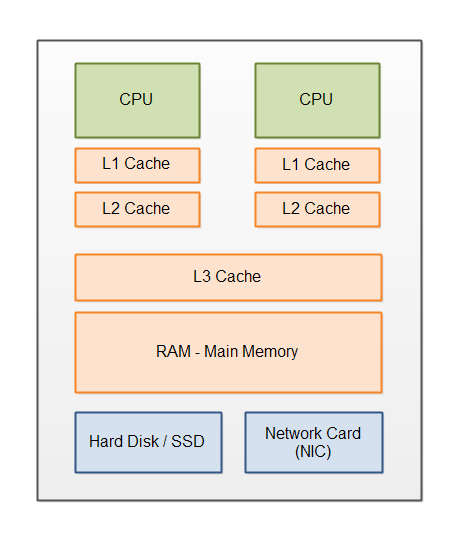 Each part will be explained in more detail below.

A modern computer may have more than one CPU. In fact this is more the rule than the exception that computers have multiple CPUs.

When a CPU reads data from the main memory it reads a block of data into its L2 and L1 caches. It is faster to read bigger blocks of memory at a time from main memory than one byte (or 64 bit) at a time. Once the data is inside the L1 and L2 caches the CPU can access them much faster. If the CPU changes any of the data in the CPU caches that data need to be written back to main memory at some point.

The L3 (Level 3) cache is typically a cache layer that sits on top of the main memory. The L3 cache is thus shared by all CPUs on the motherboard. Whenever data is needed by a CPU from main memory, a bigger block of data is read into the L3 cache. In case a CPU needs more data stored consecutively after the memory it requested previously, chances are that memory can be found in the L3 cache.

In 2015 Intel announced a new type of memory called "3D XPoint Memory" (pronounced "cross point"). This memory is almost as fast as DRAM is today, but it's durable, meaning data stored to it survives a server reboot just like data written to a hard disk.

3D XPoint Memory should also be reasonably cheap, so you can get big memory blocks - the size of a hard disk - at an affordable price. 3D XPoint memory will, hopefully, revolutionize the speed of software that needs to read and write big amounts of data.

The network interface card (NIC) is used to send and receive data over the network. The speed of the network card in your computer(s) impact how fast you can communicate with other computers.

The speed may impact the need for caching etc. of data locally, either in memory or on disk. The faster NIC you have (and the other end of the connection has), the less need for caching. Of course, if the data needs to pass through several other computers on the way, like data sent over the internet, then the speed of all these intermediate computers + NICs also matters.

Because of all the caching layers, and how ordinary hard disks work, sequential data access is faster than arbitrary data access. The reason is, that all caching strategies are based on the assumption that your program will access data sequentially. Let me explain a bit more how.

When a CPU requests a piece of data from main memory, the hardware assumes that the CPU will probably soon request the next byte (or 64 bit block) after that etc. Since many memory and disk technologies are fast at reading larger blocks of memory at a time, it makes sense for the hardware to just copy such bigger blocks of memory at a time. If the CPU actually processes the memory sequentially, accessing the next address in the data block is faster because it is already present in the cache.

Here is a diagram illustrating the caching principle in L1, L2 and L3: 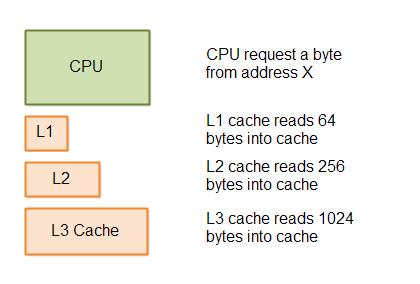 This kind of big-block-loading behaviour is true for all cache layers, all the way down to the hard disk. Even the hard disk can read bigger blocks of data from the disk faster than reading the data one byte at a time.

When you access data at arbitrary addresses in memory (or on disk) it is much slower because the data requested is seldomly located in a cache. That means that the data has to be loaded in from disk, main memory, another cache layer etc. which is slower than accessing directly in the closest cache (L1 preferably).