I won't get into too much more detail about the limitations of, and differences between, the functional and observer based stream processing approaches in this tutorial. I want to focus on the store and process pattern. But rest assured that I will document the shortcomings of especially the functional stream processing paradigm in another tutorial in a near future. Developers need to know what problems they are getting themselves into, and why they don't need to mess around with these problems.

The store and process design pattern is a result of a combination of the research and development within the domain of data streaming engines, processing API's etc. we have carried out at Nanosai, and a long project using Kafka Streams in the data warehouse department of a larger, Scandinavian insurance company.

The Store and Process Design Pattern

The store and process design pattern breaks the processing of an incoming record on a stream into two steps:

These store and process steps are illustrated here: 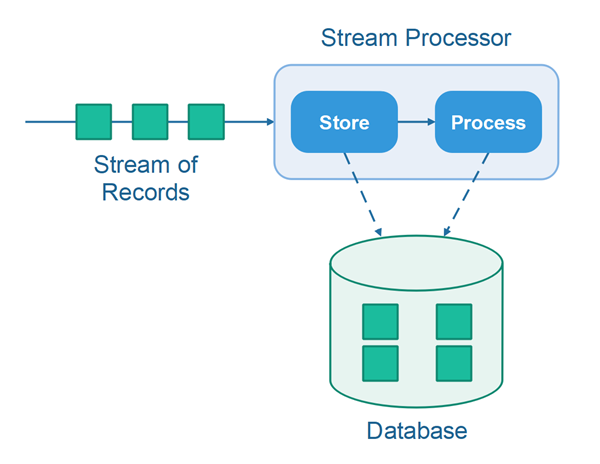 Store and Process Steps are Both Optional

Notice how the StreamProcessor class in this template only has a single method. This method is called for each record in the stream it processes. In case a stream processor is to process messages from multiple streams, you would have one method per stream. We will look at that in more detail later, but here is a simple example to give you a mental picture of that model:

In this example records from all three streams are handled by the same StreamProcessor instance. However, it is perfectly possible to split the handling of records into multiple processor classes. That depends on what makes sense in the concrete application.

It is possible to aggregate records up into an array, list or insert them into a database, and when a full batch of records have been aggregated, to process the batch at that time. Aggregating records into a batch is pretty straightforward with the store and process design pattern. The implementation shown below is again just a template, and is thus not complete. But it should be complete enough to give you an idea.

Coordinating the processing of records from multiple streams can be challenging. However, the store and process design pattern handles this situation quite well. To show you how the store and process pattern handles the coordinated processing of multiple streams, let's first imagine two streams that need to be processed in concert.

Here is an illustration of how the store and process design pattern looks when processing records from multiple streams: 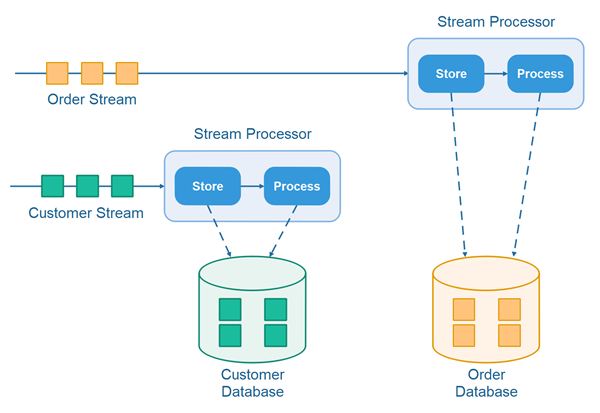 The earlier implementation template hinted at how to design a stream processor to handle records from multiple streams, but let me just show you a draft again, to make the idea clearer:

Obviously you will need to make modifications to this template. For instance, if order and customer records can represent updates to existing orders and customers, you will probably have to merge the records into the database rather than just insert them (merge = insert if not exists, update if exists).

Handling Out of Order Record Arrival

One of the issues you need to take into consideration when processing records from multiple streams in concert is, the possibility for out of order arrival of records.

Here is an illustration of how the store and process pattern looks when processing records from multiple streams in coordination: 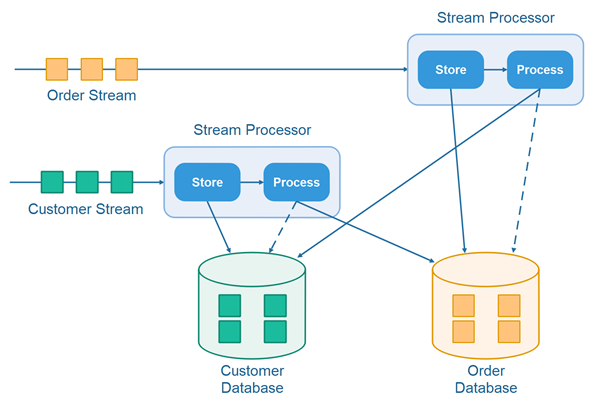 This solution scales nicely to more than 2 streams, by the way.

Implementation Template - Out of Order Handling

Here is a simple implementation template for out-of-order handling using a store and process design:

To increase performance you can cache records from the databases in in-memory data structures like hashtables, lists, trees etc. When storing a record in a database the corresponding caches will have to be updated too. When looking up records they can be looked up in the cache. If not found in the cache, the database can be queried for the record. The caches can speed up record processing quite significantly.

Having the records stored in a database makes it a lot easier to debug what records you have processed, see the latest version of a record, join records between tables, check if you actually have received all the data you expected to receive etc. - in case you discover errors in your pipeline. A stream processing pipeline is otherwise quite opaque, as records only exist in it for a short instance while being processed.

Having database storage enabled during development and testing can be quite handy - even if you don't need the database in a production setting.