On the surface these stream processing APIs look similar. However, once you try to implement complex stream processing topologies with these APIs, you realize that the design of these APIs have a quite large impact on just how "easy" processing streams with them becomes. Even subtle differences in design can have a big impact on what you can implement and especially how easy it is to do.

Before I get started on the design analysis I want to list the aspects of stream processing API design that I have come to realize are important. These design aspects are:

I will explore different design options and their consequences in the following sections.

The original motivation for this kind of stream processing API design came from APIs designed to process large amounts of objects or records easily, like the Java Stream API. Here is an example explaining the motivation:

Imagine you have millions of Employee objects (or records) in a list, and you need to: 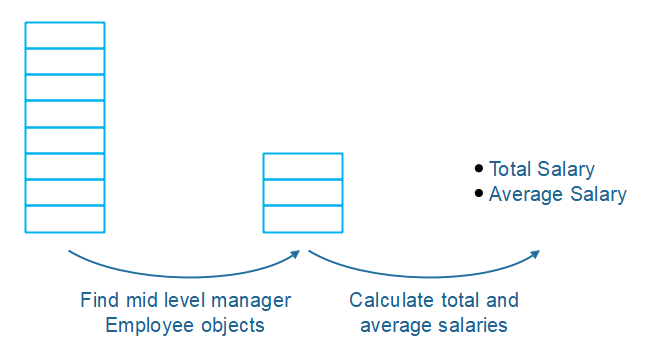 In a naive implementation of the above 2 requirements you will have iterated the original list 2 times (once to find middle managers and once to find non-managers), and iterated each of the filtered lists once. That's a lot of repeat iteration of what is essentially the same objects!

Instead, you could build an object processing graph, iterate the original list of object once, and pass each object to the graph for processing. Here is how the calculations mentioned in the example above could be structured as a graph:

Using this design, the objects are only iterated once. Two filters will forward only the relevant records to the total and average salary calculators.

However, for many smaller processing requirements using a full graph oriented approach can be overkill. Having a single listener that calculates everything you need to calculate, rather than a whole graph with filters etc. can be easier to implement, and can also perform better.

Additionally, if the graph becomes too big, it can become hard to reason about what it is doing, and you might have trouble providing feedback back up the graph, depending on what type of graph oriented design you use (functional vs. observer based).

There is no clear conclusion here. Just keep in mind that a graph oriented design is not always as beneficial in true stream processing as it is in batch processing. Allow yourself to have an open mind about the possible solution, depending on the stream processing requirements you have. The graph based approach might be appropriate, or it might be overkill. However, you can probably still implement the simple approach with a graph oriented API, if you just only create a single listener / processor that does everything.

Since graph oriented stream processing API designs are both common and popular, the rest of this article will deal with various aspects of graph based designs.

Different graph oriented stream processing API designs are designed around different types of topologies. For instance, the Java Streams API uses a chain topology, like this:

Other stream processing APIs allows you to create more advanced graphs of processors. Such a graph can contain multiple results after processing all the records or objects in the stream. Here is an example from earlier in this text: 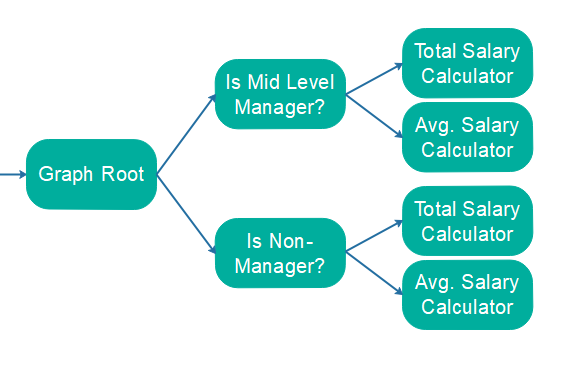 Several graph oriented stream processing APIs only allow you to create an acyclic graph, meaning records can ultimately only flow in one direction in the graph. Records cannot "cycle" back up the graph and be reprocessed. In many cases, a cyclic graph is not necessary to perform the needed operations, but once in a while a cyclic graph API could be handy.

Feeding refers to how a stream processing API is designed to feed data into its processing topology. For instance, some APIs have a concept of a Stream which you can listen to, or attach various kinds of processors to, to build a topology. But you cannot directly feed a record into the source stream. The stream is locked down to get its data from a specific source. E.g. from a list, or a Kafka topic etc. I refer to this as closed feeding design. 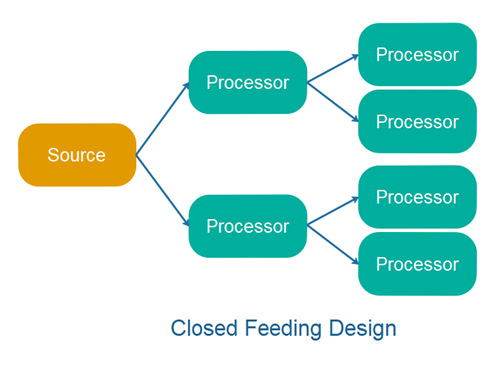 Other APIs makes it easy to feed data into your topology at every step of the topology. During normal operations this may not be necessary for many stream processing use cases, but it can be very useful for some use cases, and also during testing. Being able to feed data into the topology at every node in the graph makes testing much easier. I refer to this as an open feeding design. 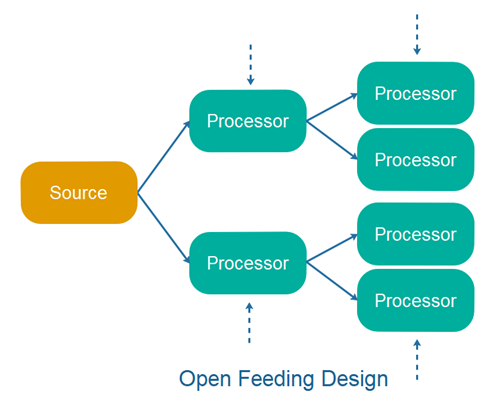 Static and dynamic forwarding are not necessarily hardly separated categories. You can have designs that are "semi-dynamic" (or "semi-static" depending on your choice of nomenclature). Maybe you can think of these two categories as different ends of a spectrum.

Dynamic forwarding means that a given processor is free to choose what processor (or queue which subsequent processors can listen to) forwards the result to. Or, at least it has a higher degree of freedom to choose, if not 100% free choice is possible.

Triggering refers to how processors in stream processing API topology are activated (triggered). Triggering mechanisms tends to fall into one of these categories:

Non-data triggering is very useful. For instance, imagine a processor that collects incoming data in a buffer, and then write the data in a single batch to disk or database every 60 seconds. If you have a steady flow of data you can trigger the write to disk / database by the incoming data. However, if the flow of data through the topology is not steady, you need to trigger the writing explicitly using a non-data trigger.

Non-data triggering is also very useful for collecting monitoring metrics from your processors. You can collect information about how many messages / records that have passed through each processor during a given time period.

Some stream processing APIs are designed to use only stateless processors. This is typically true for functional stream processing designs - e.g. the Java Streams API and Kafka Streams. Please note, that even if these APIs are intended to use stateless processors in their topology, it is still possible to plugin stateful processors. It's just that the concurrency model of these APIs use a shared state concurrency design - exactly because they do not expect their processors to have state. Thus, if you plugin a stateful processor, you will have to make the state access thread safe yourself.

Imagine a simple topology consisting of the following processors:

Imagine that the conversion from A to B is costly in terms of CPU resources. In that case it would be useful for the filter that filters the converted B's to be able to give feedback up through the topology, to tell that 10 B's have been accepted, so no more A's need be converted to B's. Here is how the changed topology could look:

To implement at topology requires that the processors can be stateful.

An alternative to stateful processors would be a topology that can be changed dynamically at runtime. In the example above, Filter 1 could be added when Filter 2 realizes no more A's need to be converted to B's.

For instance, a stream processing API might be designed to have multiple threads execute the same topology. That essentially leads to a shared state concurrency model. Kafka Streams is designed like that. And - it's an annoying design.

It's important that you find out exactly what concurrency model the stream processing API of your choice is using. Otherwise you risk creating a topology that is not thread safe.