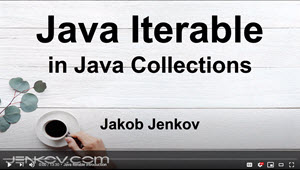 Iterate an Iterable With the for-each Loop

This example first creates a new List and adds 3 elements to it. Then it uses a for-each loop to iterate the elements of the List, and print out the toString() value of each element.

Iterate an Iterable via an Iterator

Iterate an Iterable via its forEach() Method

The method you must implement is named iterator(). This method must return a Java Iterator which can be used to iterate the elements of the object implementing the Iterable interface. Obtaining the Iterator happens behind the scenes, so you don't see that done. The Java compiler takes care of generating the code for that, when you use a Iterable with the for-each loop.

Implementations of Iterable in Java

How you implement this Iterable interface so that you can use it with the for-each loop, is explained in the text Implementing the Iterable Interface, in my Java Generics tutorial.

Here I will just show you a simple Iterable implementation example though:

An instance of Persons can be used with the Java for-each loop like this:

If you are writing some code that needs to iterate a collection lots of times in a tight loop, let's say iterate a Java List thousands of times per second, iterating the List via the Java for-each loop is slower than iterating the list via a standard for-loop as seen here: () .

The reason the for-each loop is slower is, that each iteration will call the List iterator() method, which will create a new Iterator object. Creating a new object thousands, perhaps even millions of times per second does have a small performance penalty compared to just iterating the List using a standard for-loop.

For most standard business applications where collections are iterated occasionally, this performance difference is irrelevant. It only matters for very tight loops that are executed thousands of times per second.