The Java Stack class, java.util.Stack, is a classical stack data structure. You can push elements to the top of a Java Stack and pop them again, meaning read and remove the elements from the top of the stack.

The Java Stack class actually implements the Java List interface, but you rarely use a Stack as a List - except perhaps if you need to inspect all elements currently stored on the stack.

Please note, that the Java Stack class is a subclass of Vector, an older Java class which is synchronized. This synchronization adds a small overhead to calls to all methods of a Stack. Additionally, the Vector class uses several older (no longer recommended) parts of Java, like the Enumeration which is superseded by the Iterator interface. If you want to avoid these issues you can use a Java Deque as a stack instead.

If you prefer video, I have a Java Stack tutorial video here: Java Stack Tutorial Video. 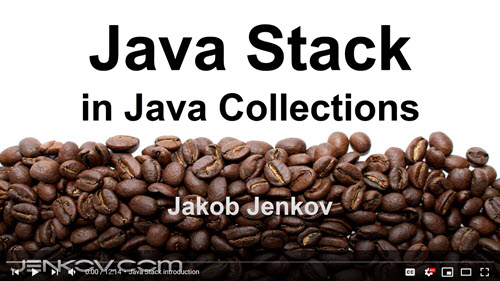 To use a Java Stack you must first create an instance of the Stack class. Here is an example of creating a Java Stack instance:

Create a Stack with a Generic Type

You can set a generic type on a Stack specifying the type of objects the Stack instance can contain. You specify the stack type when you declare the Stack variable. Here is an example of creating a Java Stack with a generic type:

The Stack created above can only contain String instances.

Using a generic type on your Stack instances is recommended as it simplifies your code (no casts needed when accessing objects on the Stack), and decreases the risk that you push an object of the wrong type on the Stack.

Once you have a Java Stack instance, you can push elements to the top of the Stack. The elements you push onto the Stack must be Java objects. Thus, you actually push objects to the Stack.

This Java example pushes a Java String with the text 1 onto the Stack. The String 1 is then stored at the top of the Stack.

Once an element is popped off a Stack, the element is no longer present on the Stack.

Peek at Top Element of Stack

The Java Stack class has a method called peek() which enables you to see what the top element on the Stack is, without popping off the element. Here is an example of peeking at the top of a Java Stack:

After running this Java example the topElement variable will contain the String object 1 which was pushed onto the Stack just before peek() was called. The String object is still present on the Stack after calling peek().

Here is how you search a Stack for an object:

After running this code the size variable will contain the value 3, since the Stack in the example contains 3 elements at the time its size() method is called.

It is also possible to process the elements on a Java Stack via the Java Stream API. You do so by first obtaining a Stream from the Stack via the stream() method.

Notice, that this example uses a Java Lambda as parameter to the Stream.forEach() method. The lambda just prints out the element to System.out

Use a Java Deque as a Stack

As mentioned at the top of this Java Stack tutorial, you can use a Java Deque as a stack too. The Java Deque tutorial also shows how you can do that - but I will show you a short example here too:

As you can see, it looks pretty similar to using a regular Java Stack.

A Stack is really handy for some types of data processing, for instance if you are parsing an XML file using either SAX or StAX. For an example, see my Java SAX Example in my Java XML tutorial.