Here is a diagram illustrating the main components of a computer: 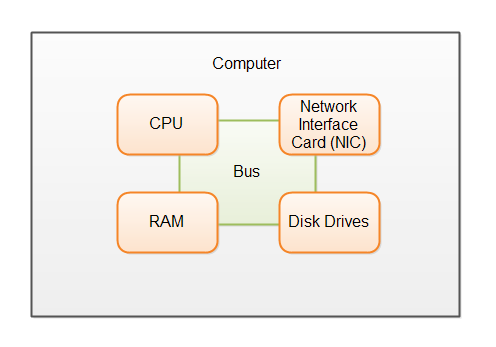 I will get into a bit more detail about each of these components in the following sections.

Some CPUs have multiple cores. Each core functions like a separate CPU which can execute instructions independently, regardless of what the other cores are doing. If your computer CPU has multiple cores, you should think about how to utilize all the cores when designing your software architecture.

CPUs often have a limited amount of cache memory, which is memory only the CPU can access, and which is much faster than the ordinary RAM.

The RAM (Random Access Memory) can store both instructions for the CPU to execute, and the data these instructions are processing. The more memory a computer has, the more data and instructions it can store. The RAM is normally cleared when the computer is shut down or rebooted. It is typically not a permanent storage (although persistent RAM actually exists).

Having a lot of memory in a computer is useful when caching data which normally reside on disk, or which is read from a remote system via the network (using the NIC).

The speed of the memory determines how fast you can read and write data in it. The faster the better.

The disk drives can store data just like the RAM, but unlike the RAM the data is saved even when the computer shuts down. The disk drives are often much slower than RAM to access, so if you need to process big amounts of data, it is preferable to keep that data in RAM.

Some disks have a bit of read cache RAM to speed up reading of data from the disk. When a chunk of data is requested from the disk, the disk will read a bigger chunk into the cache, hoping that the next chunk requested will be within the data stored in the disk cache memory.

Some types of hard disks work more like memory. Among these are SSDs (Solid State Disks). Since SSDs work like memory, the search time is very low. Every memory cell can be addressed directly. This is great if your software is doing many small reads from different places on the disk. The transfer time of SSDs are typically also higher than from normal hard disks.

I have left out devices like keyboard, mouse, monitor, USB devices, sound card and graphics cards etc. These typically do not have the big impact on your software architecture (unless you are doing computer games or something similar to that).