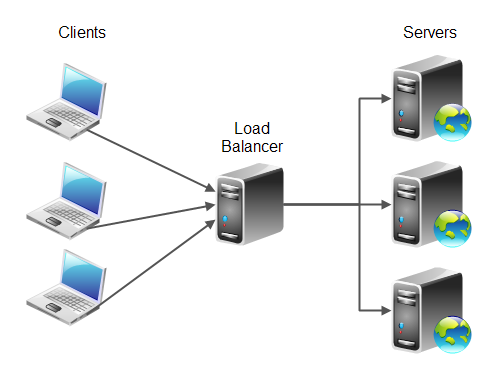 A secondary goal of load balancing is often (but not always) to provide redundancy in your application. That is, if one server in a cluster of servers fail, the load balancer can temporarily remove that server from the cluster, and divide the load onto the functioning servers. Having multiple servers help each other in this way is typically called "redundancy". When an error happens and the tasks is moved from the failing server to a functioning server, this is typically called "failover".

A set of servers running the same application in cooperation is typically referred to as a "cluster" of servers. The purpose of a cluster is typically both of the above two mentioned goals: To distribute load onto different servers, and to provide redundancy / failover for each other.

The most common load balancing schemes are:

Each of these schemes are explained in more detail below. 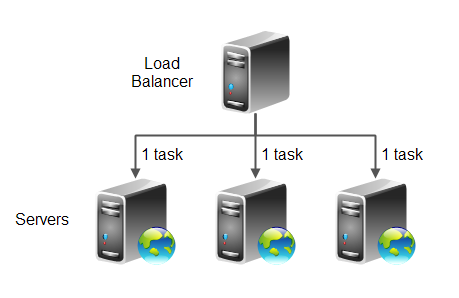 Even task distribution load balancing is suitable when the servers in the cluster all have the same capacity, and the incoming tasks statistically require the same amount of work.

Even task distribution ignores the difference in the work required to process each task. That means, that even if each server is given the same number of tasks, you can have situations where one server has more tasks requiring heavy processing than the others. This may happen due to the randomness of incoming tasks. This would often even itself out over time, since the overloaded server may all of a sudden receive a set of light work load tasks too.

So, even if even task distribution load balancing distributes the tasks evenly onto the servers in the cluster, this may not result in a truly even distribution of the work load.

DNS based load balancing is a simple scheme where you configure your DNS to return different IP addresses to different computers when they request an IP address for your domain name. This achieves an effect that is similar to the even task distribution scheme, except that most computers cache the IP address and thus keep coming back to the same IP address until a new DNS lookup is made.

While DNS based load balancing is possible, it is not the best way of reliably distributing traffic across multiple computers. You are better off using dedicated load balancing software or hardware.

For instance, if one of three servers only has 2/3 capacity of the two others, you can use the weights 3, 3, 2. This means that the first server should receive 3 tasks, the second server 3 tasks, and the last server only 2 tasks, for every 8 tasks received. That way the server with 2/3 capacity only receives 2/3 tasks compared to the other servers in the cluster. Here is a diagram illustrating this example: 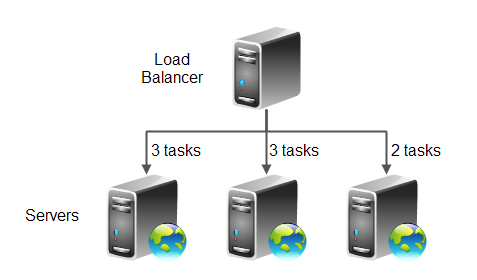 The two previous load balancing schemes are based on the assumption that any incoming task can be processed independently of previously executed tasks. This may not always be the case though.

Imagine if the servers in the cluster keep some kind of session state, like the session object in a Java web application (or in PHP, or ASP). If a task (HTTP request) arrives at server 1, and that results in writing some value to session state, what happens if subsequent requests from the same user are sent to server 2 or server 3? Then that session value might be missing, because it is stored in the memory of server 1. Here is a diagram illustrating the situation: 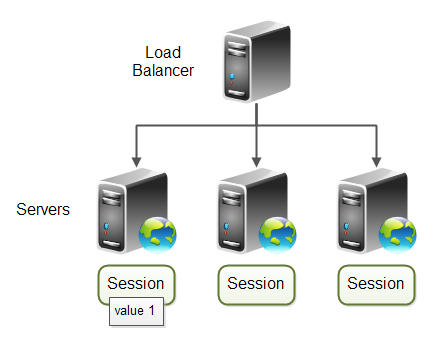 The solution to this problem is called Sticky Session Load Balancing. All tasks (e.g. HTTP requests) belonging to the same session (e.g the same user) are sent to the same server. That way any stored session values that might be needed by subsequent tasks (requests) are available. 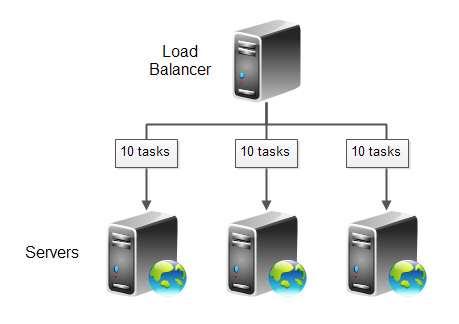 When a server finishes a task, for instance has finished sending back an HTTP response to a client, the task is removed from the task queue for that server.

The even tasks queued distribution scheme works by making sure that each server queue has the same amount of tasks in progress at the same time. Servers with higher capacity will finish tasks faster than servers with low capacity. Thus the task queues of the higher capacity servers will empty faster and thus faster have space for new tasks.

As you can imagine, this load balancing scheme implicitly takes both the work required to process each task and the capacity of each server into consideration. New tasks are sent to the servers with fewest tasks queued up. Tasks are emptied from the queues when they are finished, which means that the time it took to process the task is automatically impacting the size of the queue. Since how fast a task is completed depends on the server capacity, server capacity is automatically taken into consideration too. If a server is temporarily overloaded, its task queue size will become larger than the task queues of the other servers in the cluster. The overloaded server will thus not have new tasks assigned to it until it has worked its queue down.

The autonomous queue load balancing scheme, all incoming tasks are stored in a task queue. The servers in the server cluster connects to this queue and takes the number of tasks they can process. Here is a diagram illustrating this scheme: 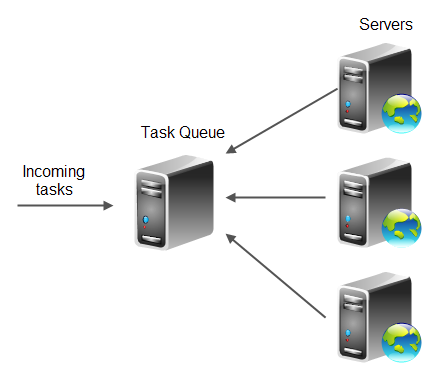 Autonomous queue load balancing also implicitly takes the work load and capacity of each sever into consideration. Servers only take tasks from the queue then they have capacity to process them.

Autonomous queue has a little disadvantage compared to even queue size distribution. A server that wants a task needs to first connect to the queue, then download the task, and then provide a response. This is 2 to 3 network roundtrips (depending on whether a response needs to be sent back).

The even queue size distribution scheme has one network roundtrip less. The load balancer sends a request to a server, and the server sends back a response (if needed). That is just 1 to 2 network roundtrips.