The richer GUI client of RIA user interfaces also results in a somewhat different internal architecture and design of the web applications. RIA user interfaces and their backends are typically more cleanly separated than for first and second generation web applications. This makes the RIA GUI more independent of the server side, and also makes it easier for GUI and server developers to work in parallel. I will explain how in this text, but first I have to explain how the typical internal design looked in first and second generation web applications. 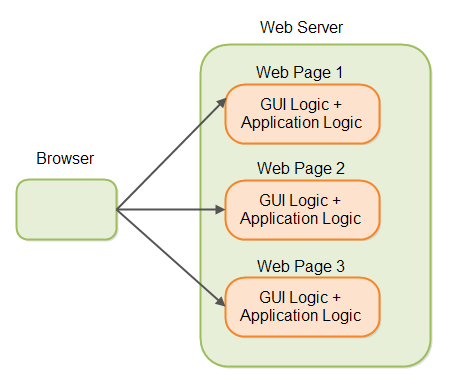 The GUI was pretty dumb. The browser showed a page. When the user clicked something in the page, the browser was typically redirected to a new page (script).

Anyone who has worked with first generation web application knows that this design was a mess. GUI logic and application logic was interleaved, making it hard to locate either one when you needed to make changes to either the GUI or application logic. Code reuse was low, because the code was spread over a large amount of web page scripts. GUI state (like pressed down buttons) which had to be maintained across multiple pages, had to be kept either in the session data on the server, or be sent along to each page and back to the browser again. If you wanted to change the programming language of the web page scripts (like from PHP to JavaServer Pages (JSP) ), that would often require a complete rewrite of the web application. It was a nightmare.

Frameworks were developed to help make second generation web applications easier to develop. Examples of such frameworks are ASP.NET (.NET), Struts + Struts 2 (Java), Spring MVC (Java), JSF (JavaServer Faces), Wicket (Java) Tapestry (Java) and many others. In the Java community two types of framework designs emerged. Model 2 and component based frameworks. I will not go to deep into the difference here, because in my opinion both designs are obsolete.

To achieve these more advanced user interfaces, RIA technologies are typically executed in the browser using either JavaScript, Flash, JavaFX or Silverlight (both Flash and Silverlight are on their way out to my knowledge, but I could be wrong). Here is a diagram illustrating RIA web application architecture and design: 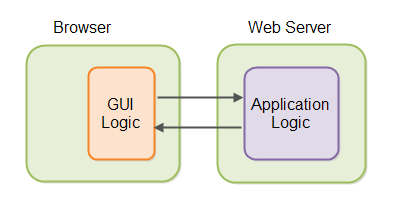 As you can see, the GUI logic is now moved from the web server to the browser. This complete split from the server logic has some positive and negative consequences for the design and architecture of the application.

First of all, the GUIs can become much more advanced with RIA technologies. That by itself is an advantage.

Second, because the GUI logic is executed in the browser, the CPU time needed to generate the GUI is lifted off the server, freeing up more CPU cycles for executing application logic.

Third, GUI state can be kept in the browser, thus further cleaning up the server side of RIA web applications.

Seventh, since GUI logic and application logic are completely separated, and the only interface between them is HTTP + JSON / XML, the GUI and application logic can also be developed independently of each other. The application logic developer can implement the services and test them independently of the GUI. And the GUI logic developer can just create a fake (mock) service which returns the data he needs to develop his GUI needs, so he can develop and test his GUI. Once the real service is ready, the mock service can be swapped for the real service without too much work.

Eighth, because the back end just consists of services that send and receive data, it is much easier add a different type of client in the future, if needed. For instance, you might want to add a native mobile iOS or Android application client, which also interacts with your back end services.

Tenth, since the GUI and back end services only exchange data, the traffic load is often smaller than if the back end had to send both the data and HTML, CSS and JavaScript. Thus your bandwidth requirements may go down (but sometimes you end up sending more small requests than you would otherwise, so it may cancel each other out).

As you can see, what on the surface seems like a small change in how we develop web applications actually have quite a lot of beneficial side effects. Once you experience these advantages in a real project, you will never want to go back to second generation web applications again.

Here is a somewhat more detailed diagram of RIA architecture, so you can see all the separations of responsibility (and thus theoretically verify the advantages I have mentioned above): 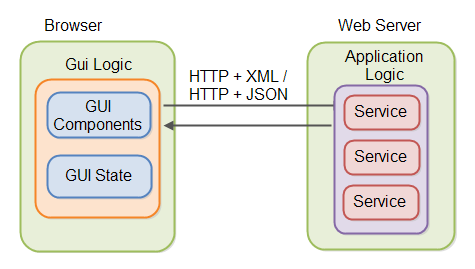 Of course there are some negative consequences of RIA technology too. The complete split of GUI logic from application logic sometimes means that the GUI logic is implemented using a different programming language than the application logic. Your GUI logic might be implemented in JavaScript, ActionScript (Flash) or Dart, and the application logic in Java, C# or PHP. Java developers can use Google Web Toolkit (GWT) to program JavaScript GUIs using Java. The new RIA technologies means that the developer team must master more technologies. This is of course a disadvantage. But I think you can live with that, given all the advantages RIA web applications have.

Here is a list of a few well-known RIA technologies:

My perception is that the world is moving towards HTML5 + CSS3 + JavaScript RIA solutions, rather than Flex and JavaFX. Microsoft has already shut down development of their Silverlight, and I suspect that JavaFX and perhaps even Flex will go the same way in the future. But that is just speculation.