Before we look at the ForkJoinPool I want to explain how the fork and join principle works in general.

The fork and join principle consists of two steps which are performed recursively. These two steps are the fork step and the join step.

A task that uses the fork and join principle can fork (split) itself into smaller subtasks which can be executed concurrently. This is illustrated in the diagram below: 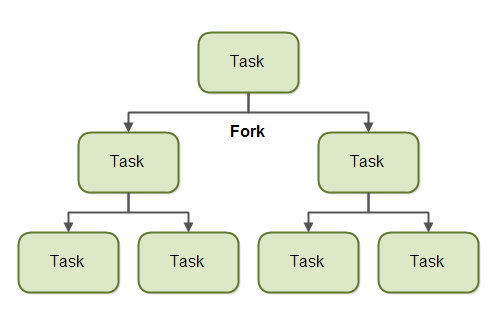 By splitting itself up into subtasks, each subtask can be executed in parallel by different CPUs, or different threads on the same CPU.

A task only splits itself up into subtasks if the work the task was given is large enough for this to make sense. There is an overhead to splitting up a task into subtasks, so for small amounts of work this overhead may be greater than the speedup achieved by executing subtasks concurrently.

The limit for when it makes sense to fork a task into subtasks is also called a threshold. It is up to each task to decide on a sensible threshold. It depends very much on the kind of work being done.

When a task has split itself up into subtasks, the task waits until the subtasks have finished executing.

Once the subtasks have finished executing, the task may join (merge) all the results into one result. This is illustrated in the diagram below: 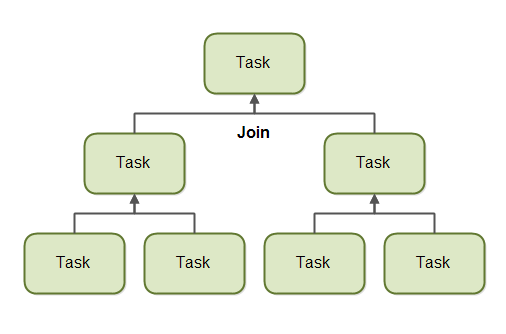 Of course, not all types of tasks may return a result. If the tasks do not return a result then a task just waits for its subtasks to complete. No result merging takes place then.

This example creates a ForkJoinPool with a parallelism level of 4.

Submitting Tasks to the ForkJoinPool

You submit tasks to a ForkJoinPool similarly to how you submit tasks to an ExecutorService. You can submit two types of tasks. A task that does not return any result (an "action"), and a task which does return a result (a "task"). These two types of tasks are represented by the RecursiveAction and RecursiveTask classes. How to use both of these tasks and how to submit them will be covered in the following sections.

A RecursiveAction is a task which does not return any value. It just does some work, e.g. writing data to disk, and then exits.

A RecursiveAction may still need to break up its work into smaller chunks which can be executed by independent threads or CPUs.

You can schedule a MyRecursiveAction for execution like this:

A RecursiveTask is a task that returns a result. It may split its work up into smaller tasks, and merge the result of these smaller tasks into a collective result. The splitting and merging may take place on several levels. Here is a RecursiveTask example:

This example is similar to the RecursiveAction example except it returns a result. The class MyRecursiveTask extends RecursiveTask<Long> which means that the result returned from the task is a Long .

The MyRecursiveTask example also breaks the work down into subtasks, and schedules these subtasks for execution using their fork() method.

Additionally, this example then receives the result returned by each subtask by calling the join() method of each subtask. The subtask results are merged into a bigger result which is then returned. This kind of joining / mergining of subtask results may occur recursively for several levels of recursion.

Notice how you get the final result out from the ForkJoinPool.invoke() method call.

It seems not everyone is equally happy with the new ForkJoinPool in Java 7. While searching for experiences with, and opinions about, the ForkJoinPool, I came across the following critique:

It is well worth a read before you plan to use the ForkJoinPool in your own projects.