If you are not familiar with Java synchronized blocks, race conditions and critical sections, you can read more about it in my tutorials:

By the way, in my Java Concurrency tutorial I have described how to implement your own locks, in case you are interested (or need it). See my text on Locks for more details.

If you prefer video, I have a video version of this tutorial here: Java Lock Tutorial 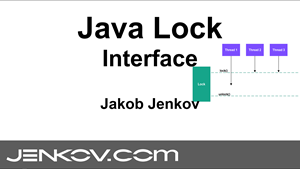 Main Differences Between a Lock and a Synchronized Block

The main differences between a Lock and a synchronized block are:

In the following sections I will explain how to use the ReentrantLock class as a Lock.

To create an instance of the ReentrantLock class you simply use the new operator, like this:

Locking and Unlocking a Java Lock

First a Lock is created. Then it's lock() method is called. Now the Lock instance is locked. Any other thread calling lock() will be blocked until the thread that locked the lock calls unlock(). Finally unlock() is called, and the Lock is now unlocked so other threads can lock it.

Obviously all threads must share the same Lock instance. If each thread creates its own Lock instance, then they will be locking on different locks, and thus not be blocking each other from access. I will show you later in this Java Lock tutorial an example of how a shared Lock instance looks.

To avoid exceptions locking a Lock forever, you should lock and unlock it from within a try-finally block, like this:

This way the Lock is unlocked even if an exception is thrown from inside the try-block.

Notice that the CounterLock class is longer than the CounterSynchronized class. However, using a Java Lock to guard the count variable internally may provide higher degrees of flexibility, should you need it. These simple examples don't really need it though - but more advanced counters might.

The ReentrantLock class is a reentrant lock. That means, that even if a thread holds the hold it can lock it again. Consequently the thread must unlock it as many times as it has locked it, in order to fully unlock the Reentrant lock for other threads.

A reentrant lock is useful in certain concurrent designs. Below is a concurrent implementation of a calculator. The calculator can hold the current result internally, and offers a set of methods that can perform calculations on that result.

Notice how the calculate() method both locks the Calculator instance's Lock before performing any calculations, and also call the add() and subtract() methods which also locks the lock. Because the ReentrantLock is reentrant, this does not cause any problems. The thread calling calculate

An unfair lock does not guarantee the order in which threads waiting to lock the lock will be given access to lock it. That means, that a waiting thread could risk waiting forever, if other threads keep trying to lock the lock, and are given priority over the waiting thread. This situation can lead to starvation. I cover starvation and fairness in more detail in my Starvation and Fairness Tutorial.

Please note, that the method tryLock() (covered later in this Java Lock tutorial) with no parameters does not respect the fairness mode of the ReentrantLock. To get fairness you must use the tryLock(long timeout, TimeUnit unit) method instead, like this:

The Java ReentrantLock also has a few interesting public methods:

I will cover each of these methods in more detail in the following sections.

The lockInterruptibly() method locks the Lock unless the thread calling the method has been interrupted. Additionally, if a thread is blocked waiting to lock the Lock via this method, and it is interrupted, it exits this method calls.

The tryLock() method attempts to lock the Lock instance immediately. It returns true if the locking succeeds, false if Lock is already locked. This method never blocks.

The tryLock(long timeout, TimeUnit timeUnit) works like the tryLock() method, except it waits up the given timeout before giving up trying to lock the Lock.

The unlock() method unlocks the Lock instance. Typically, a Lock implementation will only allow the thread that has locked the Lock to call this method. Other threads calling this method may result in an unchecked exception (RuntimeException).

The Java ReentrantLock getHoldCount() method returns the number of times a given thread has locked this Lock instance. A thread can lock a Lock more than once due to Lock reentrance.

The ReentrantLock getQueueLength() method returns the number of threads waiting to lock the Lock.

The ReentrantLock hasQueuedThread(Thread thread) method takes a Thread as parameter and return true if that Thread is queued up waiting to lock the Lock, and false if not.

The ReentrantLock hasQueuedThreads() method returns true if any threads are queued up waiting to lock this Lock, and false if not.

The ReentrantLock isFair() method returns true if this Lock guarantees fairness among threads waiting to lock it, and false if not. See Lock Fairness for more information about Lock fairness.

The ReentrantLock isLocked() method returns true if the Lock is currently locked, and false if not.