Amdahl's law can be used to calculate how much a computation can be sped up by running part of it in parallel. Amdahl's law is named after Gene Amdahl who presented the law in 1967. Most developers working with parallel or concurrent systems have an intuitive feel for potential speedup, even without knowing Amdahl's law. Regardless, Amdahl's law may still be useful to know.

I will first explain Amdahl's law mathematically, and then proceed to illustrate Amdahl's law using diagrams.

A program (or algorithm) which can be parallelized can be split up into two parts:

From this follows that:

Another way to write this is:

Wikipedia uses this version in case you read about Amdahl's law there.

According to Amdahl's law, the total execution time of the program when the parallelizable part is executed using N threads or CPUs is thus:

It still means the same though.

The execution time of the program with a parallelization factor of 2 (2 threads or CPUs executing the parallelizable part, so N is 2) would be:

Making the same calculation with a parallelization factor of 5 instead of 2 would look like this:

To better understand Amdahl's law I will try to illustrate how the law is derived. 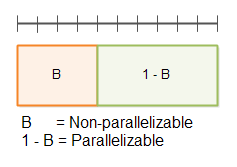 The line with the delimiters on at the top is the total time T(1).

Here you see the execution time with a parallelization factor of 2: 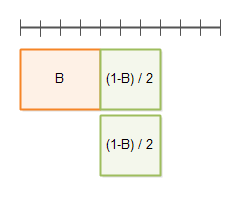 Here you see the execution time with a parallelization factor of 3: 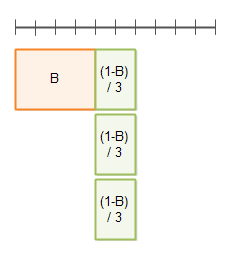 If you optimize the sequential part of a program you can also use Amdahl's law to calculate the execution time of the program after the optimization. If the non-parallelizable part B is optimized by a factor of O, then Amdahl's law looks like this:

If the time of the old version of the program or algorithm is T, then the speedup will be

We often set T to 1 just to calculate the execution time and speedup as a fraction of the old time. The equation then looks like this:

If we insert the Amdahl's law calculation instead of T(O,N), we get the following formula:

While Amdahl's law enables you to calculate the theoretic speedup of parallelization of an algorithm, don't rely too heavily on such calculations. In practice, many other factors may come into play when you optimize or parallelize an algorithm.

The speed of memory, CPU cache memory, disks, network cards etc. (if disk or network are used) may be a limiting factor too. If a new version of the algorithm is parallelized, but leads to a lot more CPU cache misses, you may not even get the desired x N speedup of using x N CPUs. The same is true if you end up saturating the memory bus, disk or network card or network connection.

My recommendation would be to use Amdahl's law to get an idea about where to optimize, but use a measurement to determine the real speedup of the optimization. Remember, sometimes a highly serialized sequential (single CPU) algorithm may outperform a parallel algorithm, simply because the sequential version has no coordination overhead (breaking down work and building the total again), and because a single CPU algorithm may conform better with how the underlying hardware works (CPU pipelines, CPU cache etc).