In some situations it is possible to prevent deadlocks. I'll describe three techniques in this text:

If you prefer video, I have a video version of this deadlock prevention tutorial here: Deadlock Prevention in Java. 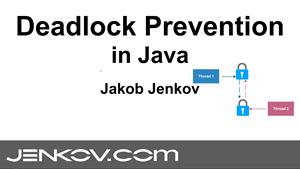 Deadlock occurs when multiple threads need the same locks but obtain them in different order.

If you make sure that all locks are always taken in the same order by any thread, deadlocks cannot occur. Look at this example:

If a thread, like Thread 3, needs several locks, it must take them in the decided order. It cannot take a lock later in the sequence until it has obtained the earlier locks.

For instance, neither Thread 2 or Thread 3 can lock C until they have locked A first. Since Thread 1 holds lock A, Thread 2 and 3 must first wait until lock A is unlocked. Then they must succeed in locking A, before they can attempt to lock B or C.

Lock ordering is a simple yet effective deadlock prevention mechanism. However, it can only be used if you know about all locks needed ahead of taking any of the locks. This is not always the case.

Another deadlock prevention mechanism is to put a timeout on lock attempts meaning a thread trying to obtain a lock will only try for so long before giving up. If a thread does not succeed in taking all necessary locks within the given timeout, it will backup, free all locks taken, wait for a random amount of time and then retry. The random amount of time waited serves to give other threads trying to take the same locks a chance to take all locks, and thus let the application continue running without locking.

Here is an example of two threads trying to take the same two locks in different order, where the threads back up and retry:

In the above example Thread 2 will retry taking the locks about 200 millis before Thread 1 and will therefore likely succeed at taking both locks. Thread 1 will then wait already trying to take lock A. When Thread 2 finishes, Thread 1 will be able to take both locks too (unless Thread 2 or another thread takes the locks in between).

An issue to keep in mind is, that just because a lock times out it does not necessarily mean that the threads had deadlocked. It could also just mean that the thread holding the lock (causing the other thread to time out) takes a long time to complete its task.

Additionally, if enough threads compete for the same resources they still risk trying to take the threads at the same time again and again, even if timing out and backing up. This may not occur with 2 threads each waiting between 0 and 500 millis before retrying, but with 10 or 20 threads the situation is different. Then the likeliness of two threads waiting the same time before retrying (or close enough to cause problems) is a lot higher.

A problem with the lock timeout mechanism is that it is not possible to set a timeout for entering a synchronized block in Java. You will have to create a custom lock class or use one of the Java 5 concurrency constructs in the java.util.concurrency package. Writing custom locks isn't difficult but it is outside the scope of this text. Later texts in the Java concurrency trails will cover custom locks.

Every time a thread takes a lock it is noted in a data structure (map, graph etc.) of threads and locks. Additionally, whenever a thread requests a lock this is also noted in this data structure.

When a thread requests a lock but the request is denied, the thread can traverse the lock graph to check for deadlocks. For instance, if a Thread A requests lock 7, but lock 7 is held by Thread B, then Thread A can check if Thread B has requested any of the locks Thread A holds (if any). If Thread B has requested so, a deadlock has occurred (Thread A having taken lock 1, requesting lock 7, Thread B having taken lock 7, requesting lock 1).

Below is a graph of locks taken and requested by 4 threads (A, B, C and D). A data structure like this that can be used to detect deadlocks.

So what do the threads do if a deadlock is detected?

One possible action is to release all locks, backup, wait a random amount of time and then retry. This is similar to the simpler lock timeout mechanism except threads only backup when a deadlock has actually occurred. Not just because their lock requests timed out. However, if a lot of threads are competing for the same locks they may repeatedly end up in a deadlock even if they back up and wait.

A better option is to determine or assign a priority of the threads so that only one (or a few) thread backs up. The rest of the threads continue taking the locks they need as if no deadlock had occurred. If the priority assigned to the threads is fixed, the same threads will always be given higher priority. To avoid this you may assign the priority randomly whenever a deadlock is detected.

Next: Starvation and Fairness
Featured Videos