If you prefer video, I have a playlist of videos covering some of the same topics that this tutorial series covers. You can find the video playlist here:
Java Concurrency & Multithreading - Video Playlist 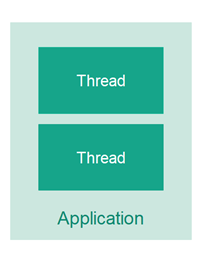 A thread is not equal to a CPU though. Usually a single CPU will share its execution time among multiple threads, switching between executing each of the threads for a given amount of time. It is also possible to have the threads of an application be executed by different CPUs. 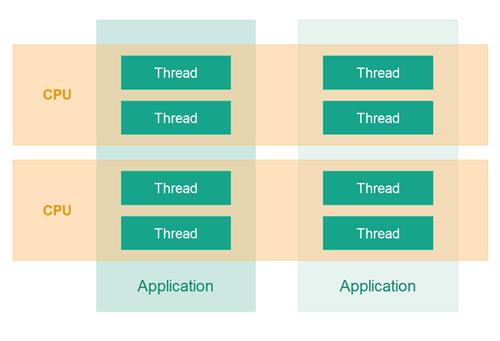 I will explain each of these reasons in more detail in the following sections.

Better Utilization of a Single CPU

One of the most common reasons is to be able to better utilize the resources in the computer. For instance, if one thread is waiting for the response to a request sent over the network, then another thread could use the CPU in the meantime to do something else. Additionally, if the computer has multiple CPUs, or if the CPU has multiple execution cores, then multithreading can also help your application utilize these extra CPU cores.

Another reason to use multithreading is to provide a better user experience. For instance, if you click on a button in a GUI and this results in a request being sent over the network, then it matters which thread performs this request. If you use the same thread that is also updating the GUI, then the user might experience the GUI "hanging" while the GUI thread is waiting for the response for the request. Instead, such a request could be performed by a backgroun thread so the GUI thread is free to respond to other user requests in the meantime.

A fourth reason is to share resources of a computer more fairly among users. As example imagine a server that receives requests from clients, and only has one thread to execute these requests. If a client sends a requests that takes a long time to process, then all other client's requests would have to wait until that one request has finished. By having each client's request executed by its own thread then no single task can monopolize the CPU completely.

Along with multitasking came new challenges for software developers. Programs can no longer assume to have all the CPU time available, nor all memory or any other computer resources. A "good citizen" program should release all resources it is no longer using, so other programs can use them.

Multithreading can be a great way to increase the performance of some types of programs. However, mulithreading is even more challenging than multitasking. The threads are executing within the same program and are hence reading and writing the same memory simultaneously. This can result in errors not seen in a singlethreaded program. Some of these errors may not be seen on single CPU machines, because two threads never really execute "simultaneously". Modern computers, though, come with multi core CPUs, and even with multiple CPUs too. This means that separate threads can be executed by separate cores or CPUs simultaneously. 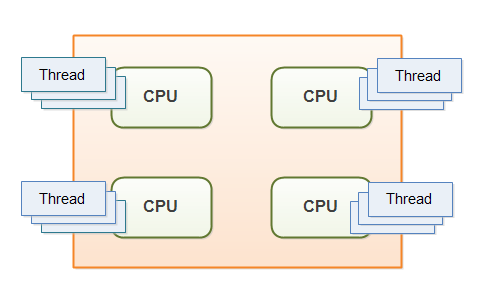 Without proper precautions any of these outcomes are possible. The behaviour would not even be predictable. The outcome could change from time to time. Therefore it is important as a developer to know how to take the right precautions - meaning learning to control how threads access shared resources like memory, files, databases etc. That is one of the topics this Java concurrency tutorial addresses.

Multithreading and Concurrency in Java

Java was one of the first languages to make multithreading easily available to developers. Java had multithreading capabilities from the very beginning. Therefore, Java developers often face the problems described above. That is the reason I am writing this trail on Java concurrency. As notes to myself, and any fellow Java developer whom may benefit from it.

However, a lot has happened in the world of concurrent architecture and design since the first Java concurrency books were written, and even since the Java 5 concurrency utilities were released

New, asynchronous "separate state" platforms and toolkits like Netty, Vert.x and Play / Akka and Qbit have emerged. New non-blocking concurrency algorithms have been published, and new non-blocking tools like the LMax Disrupter have been added to our toolkits. New functional programming parallelism has been introduced with the Fork and Join framework in Java 7, and the collection streams API in Java 8.

With all these new developments it is about time that I updated this Java Concurrency tutorial. Therefore, this tutorial is once again work in progress. New tutorials will be published whenever time is available to write them.

If you are new to Java concurrency, I would recommend that you follow the study plan below. You can find links to all the topics in the menu in the left side of this page too.

The basics of Java concurrency:

Java concurrency constructs that help against the issues above: