Additionally, using a thread pool can make it easier to control how many threads are active at a time. Each thread consumes a certain amount of computer resources, such as memory (RAM), so if you have too many threads active at the same time, the total amount of resources (e.g. RAM) that is consumed may cause the computer to slow down - e.g. if so much RAM is consumed that the operating system (OS) starts swapping RAM out to disk.

If you prefer video, I have a video version of this thread pool tutorial here: Threads Pools in Java 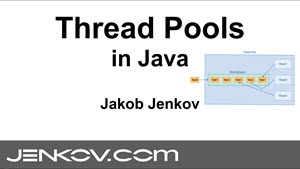 How a Thread Pool Works

Instead of starting a new thread for every task to execute concurrently, the task can be passed to a thread pool. As soon as the pool has any idle threads the task is assigned to one of them and executed. Internally the tasks are inserted into a Blocking Queue which the threads in the pool are dequeuing from. When a new task is inserted into the queue one of the idle threads will dequeue it successfully and execute it. The rest of the idle threads in the pool will be blocked waiting to dequeue tasks.

Thread pools are often used in multi threaded servers. Each connection arriving at the server via the network is wrapped as a task and passed on to a thread pool. The threads in the thread pool will process the requests on the connections concurrently. A later trail will get into detail about implementing multithreaded servers in Java.

Here is a simple thread pool implementation. The implementation uses the standard Java BlockingQueue that comes with Java from Java 5.

Below here is the PoolThreadRunnable class which implements the Runnable interface, so it can be executed by a Java thread:

And here is finally an example of how to use the ThreadPool above:

To execute a task the method ThreadPool.execute(Runnable r) is called with a Runnable implementation as parameter. The Runnable is enqueued in the blocking queue internally, waiting to be dequeued.

The Runnable will be dequeued by an idle PoolThread and executed. You can see this in the PoolThread.run() method. After execution the PoolThread loops and tries to dequeue a task again, until stopped.

To stop the ThreadPool the method ThreadPool.stop() is called. The stop called is noted internally in the isStopped member. Then each thread in the pool is stopped by calling doStop() on each thread. Notice how the execute() method will throw an IllegalStateException if execute() is called after stop() has been called.

The threads will stop after finishing any task they are currently executing. Notice the this.interrupt() call in PoolThread.doStop(). This makes sure that a thread blocked in a wait() call inside the taskQueue.dequeue() call breaks out of the wait() call, and leaves the dequeue() method call with an InterruptedException thrown. This exception is caught in the PoolThread.run() method, reported, and then the isStopped variable is checked. Since isStopped is now true, the PoolThread.run() will exit and the thread dies.