This may all sound a bit complicated, so I will elaborate more on race conditions and critical sections in the following sections.

If you prefer video, I have a video version of this tutorial here: Race Conditions in Java Multithreading 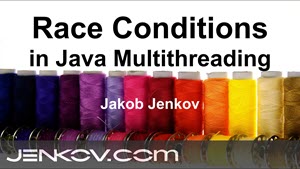 Race conditions can occur when two or more threads read and write the same variable according to one of these two patterns:

The read-modify-write pattern means, that two or more threads first read a given variable, then modify its value and write it back to the variable. For this to cause a problem, the new value must depend one way or another on the previous value. The problem that can occur is, if two threads read the value (into CPU registers) then modify the value (in the CPU registers) and then write the values back. This situation is explained in more detail later.

The check-then-act pattern means, that two or more threads check a given condition, for instance if a Map contains a given value, and then go on to act based on that information, e.g. taking the value from the Map. The problem may occur if two threads check the Map for a given value at the same time - see that the value is present - and then both threads try to take (remove) that value. However, only one of the threads can actually take the value. The other thread will get a null value back. This could also happen if a Queue was used instead of a Map.

Imagine if two threads, A and B, are executing the add method on the same instance of the Counter class. There is no way to know when the operating system switches between the two threads. The code in the add() method is not executed as a single atomic instruction by the Java virtual machine. Rather it is executed as a set of smaller instructions, similar to this:

Observe what happens with the following mixed execution of threads A and B:

In the execution sequence example listed above, both threads read the value 0 from memory. Then they add their individual values, 2 and 3, to the value, and write the result back to memory. Instead of 5, the value left in this.count will be the value written by the last thread to write its value. In the above case it is thread A, but it could as well have been thread B.

More formally, the situation where two threads compete for the same resource, where the sequence in which the resource is accessed is significant, is called race conditions. A code section that leads to race conditions is called a critical section.

To illustrate how a check-then-act critical section can lead to race conditions, look at the following example:

If two or more threads call the checkThenAct() method on the same CheckThenActExample object, then two or more threads may execute the if-statement at the same time, evaluate sharedMap.containsKey("key") to true, and thus move into the body code block of the if-statement. In there, multiple threads may then try to remove the key,value pair stored for the key "key", but only one of them will actually be able to do it. The rest will get a null value back, since another thread already removed the key,value pair.

Here is a very simplified Java code example to show what I mean:

Notice how the add() method adds values to two different sum member variables. To prevent race conditions the summing is executed inside a Java synchronized block. With this implementation only a single thread can ever execute the summing at the same time.

However, since the two sum variables are independent of each other, you could split their summing up into two separate synchronized blocks, like this:

This example is very simple, of course. In a real life shared resource the breaking down of critical sections may be a whole lot more complicated, and require more analysis of execution order possibilities.